A large falcon species (larger than a Peregrine) with similar sexes - although the female is clearly larger than the male. The back and wing are a blueish black, more or less dark depending on regions, and littered with white spots. Birds from the east of the South Island are larger and paler than their North Island counterparts. Chin is white, the breast is markedly streaked, belly and undertail rufous. Wings are barred underneath. Juveniles are much darker, the back and upperwings a uniform blue-black and the underparts all rufous. The legs are yellow.

A quick and powerful 'kek-kek-kek'. This species is notably noisy on its breeding sites.

It is found in diverse habitats: forest edges, copses, but also tussock land in the South Island. In winter, the young can be observed in orchards and cities.

This falcon is extremely aggressive, especially when defending its nest and is known to pursue its victims inside farm buildings. The species has some detractors despite the protection it is under.

Generally flies close to the ground, like a sparrowhawk, to catch its prey by surprise.

First and foremost a bird specialist, with the female capable of taking down herons or ducks. It is also known to hunt rabbit and young hares.

Sexual maturity occurs at two year of age. Like other falcon, it does not build a nest and lays its eggs directly on the ground, a platform in a tree (e.g. a broken branch or a large epiphyte). The clutch (2-4 eggs) is incubated for approximately 5 weeks and the chicks stay in the nest for roughly 5 weeks after hatching. the fledglings depend on their parents for food for 2-3 months. The mean breeding success is 1.9 young per pair having laid eggs. 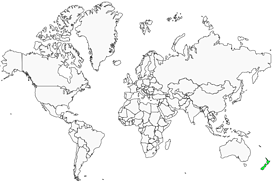 A New Zealand endemic, it breeds in the three main island (North, South and Stewart) as well as Auckland Island. As never been observed outside New Zealand, not even in Australia,

The introduction of many mammalian predator (dogs, cats, possums, mustelids, rats, etc.) to New Zealand is most likely the main cause of the species' decline. Current population estimates are of some 4,000 pairs. The New Zealand Falcon is classed as "near threatened" by BirdLife International. However, it seems that the introduction of the rabbit, song thrush and blackbird may have widened its prey spectrum.