In adults, most of the plumage is blue-grey. The crown, forehead, ear coverts, chin and upper throat are white. A tuft of light brown to bronze coloured feathers is found at the bas of the neck and the upper breast. Long lanceolated feathers decorate the central part of the bird's back, but these do not extend beyond the tip of the tail. The lower part of the body are grey. From below, the black-tipped primaries and the coverts, that have a white center and a grey border, all contribute to giving the wings a barred aspect. The bill is usually black, but the base of the lower mandible can be of a lighter grey and the tip sport a yellow mark. The lore is blue-grey or yellow-green. The iris go from lead grey to a dull yellow. The legs are either a greenish yellow or rufus-coloured. The variation in colour of the non-feathered parts might be linked to either sex, age or seasonal variation. Some albinistic forms have been observed.

Juveniles do not have the bronzed coloured plumage on the throat and breast. The grey feathers are few in numbers and the underparts are mostly brownish. The parryi subspecies has a darker body (both under and upperparts). In New Caledonia, individuals are smaller (on average 8cm less). In Western Australia, birds are also smaller but the different is not so clearly marked as to warrant their classification as a distinct species.
This egret resembles the grey heron, but the white face and the bronzed breast are diagnostic. The barred aspect of the wings allows to distinguish this species from a dark phase Pacific Reef Heron.

The White-Faced Heron, while discreet, has a rather broad register. In flight, in will emit a guttural "graaw". When the bird is returning to the nest, i can make a a decreasing "gow-gow-gow". The alarm call is a high pitched "vrank". A very short (less than a second) "graak" in flight conveys disquiet or aggression.

White-Faced Herons use a wide variety of habitats, mainly marshes, mangroves, lakes and river banks. They can also be found near reservoirs, drainage ditches or intertidal mudflats. In New South Wales (Eastern Australia) they uses both freshwater and brackish marshes. In this region, they also occur in pastures, mudflats or even rocky shores.

Its flight has been described variously as "fastidious", "laborious", "lazy" and "irregular". According to others, it is characterised by graceful wing movements. However it may be, it seems this egret flies with its neck stretched further out than any other heron species, especially when attempting nuptial parade flights or carrying nest material.

When on the lookout for food, the White-Faced Heron uses various techniques: it can remain upright and motionless or walk very slowly, crouching or in a very rectilinear posture. In intertidal mudflats, it runs quickly and chases prey with wings spread out.

Where the water is not too deep, it will scratch the bottom with its feet. In deeper water, it will change position after a successful hunt. When it remains motionless, scanning the water, it ever rarely moves its head. Sometimes it can be seen taking food off vegetation while moving its wings slowly. Preys are found by sight. White-Face Heron on the hunt are often followed by ibises.

This bird is not very sociable and and will defend very well defined feeding grounds. It patrols it territory on the wing, using intimidation manoeuvres and emitting aggressive "graak" calls. However, on some occasions, the White-Faced Heron will feed in groups of up to 70 or 80 individuals in pastures or mangroves. In New South Wales, its activity is exclusively diurnal. When the weather becomes too harsh or in case of strong winds, the birds abandon intertidal mudflats. In autumn and winter, this egret retreats to terrestrial habitats and the search for food in large groups or more than 50 individuals becomes the favoured option.

White-Faced Herons have feeding habits that vary according to the habitat they use. On mudflats, they prey mostly on shrimp and crabs.

In terrestrial habitats their diet consists of insects, but also branchiopods (Notostraca), arachnids, worms and snails. Its appetite for tree frogs can be seen as a major factor contributing to its expansion in New Zealand. Studies of stomach contents have revealed that more than 40% of prey are invertebrates (insect, worms, crustaceans, molluscs). The remaining 60% are made up of small vertebrates (fish ans small mammals). White-Faced Herons also voluntarily ingest vegetation.

During the nuptial parade, one of the pair will walk on a branch, almost immediately followed by the other partner that will have its head lowered. The crest and scapular feather are ruffled and the twig pecking that is part of the parade can be interpreted as a ritual offering. Quickly after, both partner take off while calling.

Nesting begins in August, sometimes earlier, which corresponds roughly to February in the northern hemisphere. Breeding pairs are either solitary or in small loose groups. The usual is 4 nests over a 2 km stretch. Observations on the reuse of old nests are inconclusive.

However, in New South Wales, nest have reportedly been used for 3 consecutive seasons. The nest is a platform built with twigs and has a diameter of about 40 cm for a depth of 9 cm. It is usually placed on a fork or on a strong horizontal branch in a tall tree, about 7 to 20 meters from the ground. It does not necessarily hang over open water. In Western Australia, the eggs are a greenish white and their size is roughly 49mm x 35mm. They are thought to be smaller and rounder in Tasmania and the other islands. A brood contains 2 to 6 eggs that will be by incubated by both parents for about 24 to 26 days.

Both partners equally share parenting duties. They do so taking turns and each change of shift is the occasion for bill-clattering displays, calls and grooming. In Tasmania, parents tends to do longer shifts. In the early days, food is brought to the nest every 40 to 70 minutes, but when the chick are six weeks old, chicks are only fed 5 to 6 times a day. Just before their first flight, the brood is only fed twice a day: in the morning and in the evening. The chicks grabs their parents' bills to stimulate regurgitation. If alarmed, they freeze like bitterns would do and remain motionless, their bill pointing upwards, until the danger has passed. The breeding season is very long and can last up to 8 months. In Tasmania, during the breeding season, up to 5 broods can be raised. Young White-Faced Heron stay with their parents until the following season at which point the parent force them to leave. 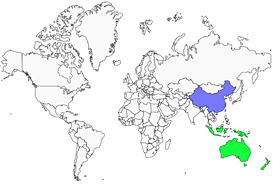 The White-Faced Heron is the most common and widespread Australian heron. Its range has expanded from the shore to nearly the whole continent, except for the arid heartlands. The only obstacle to it colonising new habitats would be a lack of trees and water during the breeding period. The species is also well established in Papua-New Guinea. The New Caledonia subspecies has a few dozen breeding pairs. Four subspecies are usually recognised: E. n. novaehollandiae (found in most of Australia), E. n. parryi (north-west Australia), E. n. nana (New Caledonia - contested, sometimes considered to be E. n. novaehollandiae) and E. n. austera (Papua-New Guinea - contested, sometimes considered to be E. n. novaehollandiae).

As mentioned in the "geographic range" section, the White-Faced Heron is widespread within its geographical range, which is expanding. The population is increasing and is thought to be colonising Christmas Island in the Indian Ocean. Its IUCN status is Least Concern (LC).